PRAGUE—When I got the chance to play chess here against living legend Garry Kasparov, there was never any doubt of the outcome: I was there to lose.

But it would be a glorious defeat, a story for the great-grandkids. I thought of the challenge as if Muhammad Ali had asked me to get in the ring for a few rounds. I’m no pugilist, either, but I wouldn’t pass up the opportunity to see how he moved up close—never mind the fist in my face. You just have to trust that your more talented opponent is professional enough not to completely demolish you.

I was given the opportunity to battle Kasparov at what he does best after interviewing him last week. Antivirus company Avast, sponsor of The Parallax, had invited him to deliver the keynote speech for the gala opening of its new office building here. Part of the celebration involved Kasparov simultaneously playing 10 games of chess, against 10 different opponents. We would sit at a long table covered by chessboards. He, the champion, would be white. We, the cocky upstarts, would be black.

We, the soon-to-be-victims of the great Kasparov, lined up with our backs to the crowd and perched on wobbly, high stools. I expected each person to fall off when defeated, literally knocked off.

Kasparov faced the crowd of 400 or so people. If you’re not familiar with his bona fides, he’s considered to be the best chess player alive. He spent 225 out of 228 months, from 1986 to 2005, as the No. 1 ranked chess player in the world. He holds the record for most consecutive professional chess tournament victories, at 15, and he held the highest ranking for a chess player ever from 1999 until 2013.

So when you face him across the chessboard, you’re not looking at a friendly, frivolous competitor. You’ve just entered the den of a hungry lion carrying a zebra carcass. Have you notified your next of kin?

With the master on white, the rest of us played black and faced the ceiling-height windows and the wintery Prague night beyond Kasparov. Despite the nervousness that permeated the air—some of my fellow victims were visibly shaking—people were mostly in good spirits, making jokes. 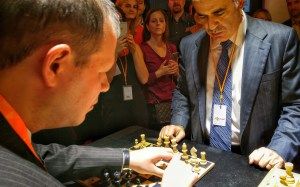 A Czech TV station was broadcasting the competition live. We were asked how many moves we expected to last. The more talented players among us, those with competitive chess association rankings, responded with relative confidence: “Twenty!” “Twenty-six!”

Such seriousness. I figured that a bit of realistic humor was needed: “Five!”

The player to my left, five-time U.S. blind chess champion Alex Barrasso, replied, “Four.” That’s not good, I thought. This guy is supposed to be good at chess. Was he just being humble?

The games quickly diverged based on talent. Nobody knew Kasparov’s strategy, which we later were told was to let everybody get to 20 moves, or about a half-hour of play.

Then the killings began. I was done at 23 moves, when Kasparov checkmated my king, pinned between his rook and bishop. Most others were done by 26 moves.

And yet Kasparov remained humble. Barrasso, who used a special chessboard for the blind that has pegs in the bottom of the pieces to keep them in place, accidentally knocked one of his black pieces off the board after a Kasparov move. It landed near the pile of other black pieces Kasparov had taken from Barrasso. Upon his return to Barrasso’s board, despite the distracting complexities of simultaneously playing 10 games in front of a chattering crowd, Kasparov noticed the missing piece and returned it from the dead pile to its proper place on the board.

But lest you confuse Kasparov’s professional behavior and laser-sharp memory for pity, he defeated Barrasso on the next move, at 28. Chess is a game without pity. Your adversaries want to kill your king and will take any opening they can find. As with protecting your data, smartphone, and computer, you have to adapt your defenses to stop the latest threats.

I’m no expert chess player. I’m not even ranked. I knew that I was there to have the opportunity to tell the world what it’s like for an average chess fan to face the Kasparov winning machine. No wonder Putin wanted people like him out of Russia, I thought.

More than a decade after his retirement from competitive chess, Kasparov has transitioned into a human rights activist. After a period in Russian politics that saw his efforts stymied in 2008 by, he says, the Russian political establishment and Russian President Vladimir Putin, Kasparov began to focus on broader human rights goals.

“The role that the tech industry plays in defending freedom and advancing human rights was heavily underestimated by its captains,” said Kasparov, now chairman of the Human Rights Commission, where he focuses on encouraging democracy and fighting totalitarianism. He resists talk of a “Russian national character,” arguing that Putin needs wars to stay in office, and he is just as quick to criticize Western democracies for weakness as he is to denounce power-hungry regimes for their corrupt tactics.

Just as he does in chess, Kasparov thoughtfully shifts his positions as situations evolve. He has proven to be every bit as adaptable in the real world as on the chessboard.

But at least in chess, the board resets for the next game.